Skip to content
Home » Anime » How Tall Are the Attack on Titan Characters?

How Tall Are the Attack on Titan Characters? 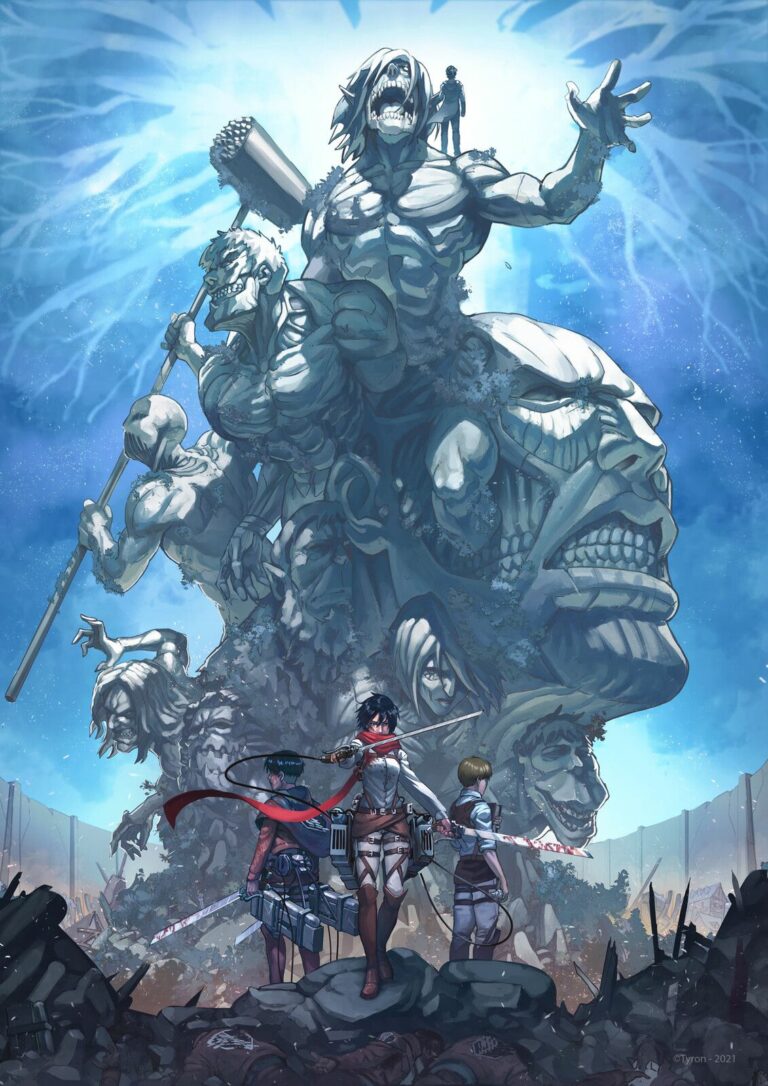 Just how tall are they? Well, let’s find out.

Attack on Titan has become a cultural phenomenon within and beyond the anime community.

The show has loyal fans that enjoy watching the story unfold. And it’s easy to understand why.

Attack on Titan has a cast of unique and complex characters. The fandom has many questions about these characters.

Just how tall are they?

Eren Jaeger is a man tormented by events of the past.

Eren lost his mother at a very young age. He was forced to watch as a Titan devoured her. Since then, Eren has dedicated his heart to ridding the world of Titans.

The plot takes a turn for the unexpected when a Titan eats Eren. He survives somehow and becomes the Attack Titan.

Eren’s appearance changes as the plot progresses. He has black hair, worn either long or short, and is well-built thanks to rigorous training.

Eren is mostly seen wearing his survey-corps uniform during the show.

Levi Ackerman had a particularly tough childhood. He lost his mother at a young age, and his uncle taught him how to survive.

Levi picked up some violent tendencies and became a notorious thug in his district. Levi’s uncle eventually left him to fend for himself.

Levi learned to harness his anger and later joined the survey corps. He is instrumental to the plot and is a beloved character.

Mikasa Ackerman has simple motivations. First, she has worked hard to protect Eren since the show’s beginning.

Mikasa feels indebted to Eren after he saved her life when they were kids. She loves him deeply and will go above and beyond for his sake.

Mikasa isn’t so sure herself. But she hasn’t stopped loving Eren for even one second. She is determined to pull him off the dark path and back into the light.

Armin has been friends with Eren and Mikasa since they were children. Like them, he also lost his parents earlier in the show.

Armin’s parents were executed for trying to flee the walls. His grandfather died fighting to take back Wall Maria.

Armin was not as determined as Eren to join the survey corps at first. However, he later changed his mind after losing his grandfather.

Armin is incredibly smart. His intelligence becomes vital as the plot progresses, and he quickly becomes an admirable character.

Jean Kirtstein is a pragmatist. From his first appearance on the show, he was proud to say that he wanted to live an easy life.

Jean later proves himself to be a good leader. He may seem self-centered, but he values the lives of his allies.

Jean and Eren butt heads a lot at the beginning of the show.

They later grow to respect each other. Jean always speaks his mind and is not afraid to call his friends out when they cross the line.

Reiner Braun is a key catalyst for the show’s events.

In his armor titan form, Reiner kicked a hole into Wall Maria. This began a series of events that continue to unfold even in the present story.

Reiner regrets his early actions. He developed a case of dissociative identity disorder because he couldn’t live with his actions.

Reiner later comes to terms with what he has done. However, he knows he cannot change the past and tries his best to preserve the future.

Annie is a tough fighter who earned the right to become a fabled Marleyan warrior. She was part of the operation to recover the founding Titan along with Reiner and Bertolt.

Annie’s combat skills and aggressive training came in handy when they joined the training corpse. She easily outclasses the rest of her peers in combat.

Annie is imprisoned within a crystal for a long time. She does a lot of reflection while trapped and listens to Armin whenever he comes to visit.

Annie has a soft spot for Armin.

Connie joins the training corps for a chance to live an easy life in the inner walls.

This is not uncommon. He is not the only one chasing this dream.

Connie and Jean are moved by Eren’s words and later change their minds. Connie is skilled with the vertical maneuvering equipment and uses this to his advantage in battle.

Connie becomes fast friends with Sasha and is torn by her death. After that, he develops a hatred for Eren and questions why they bothered trying to save him.

Sasha is a kindred soul. She is from a small village within Wall Rose and joins the training corps hoping for a good meal.

Sasha gets in trouble on her first day for eating a steamed potato during training. This one moment gave birth to so many jokes.

Sasha is a joy to be around. She radiates positive energy, and her love for food is infectious.

Her death greatly affects her closest friends. Connie is especially torn up about it and blames Eren for making them come to save him.

Erwin is an example of a great leader. He was in charge of the survey corps and believed humanity deserved to be free.

Erwin did not always make the best decisions; he fought for what he believed in.

Erwin strives to bring back as many as possible from the survey corps missions.

Things don’t always go according to plan. At the plot climax, he makes the ultimate sacrifice by sacrificing himself and his men for the greater good.

Historia is a key cog in the plot progression. She is the illegitimate child of Rod Reiss. Her father intended to use her to take back the power of the founding Titan.

Ymir fell in love with Historia and deemed her a person that needed to be protected at all costs. Other members of the training corps seemed to agree.

No one knew of her importance until much later in the show. Historia is crowned queen when the truth of her identity comes out.

As the show progresses, she becomes a public figure and begins to feel trapped. However, she later falls in love and has a child.

Bertholdt kickstarted the show’s entire plot when he kicked a hole into wall Maria. Then, with Reiner and Annie, he planned to take back the power of the founding titan.

Bertholdt acts as the voice of reason for his group. He kept Reiner grounded and tried to keep Annie under control.

Things didn’t go according to plan, and Armin ate Bertholdt. Reiner and Bertholdt were close friends, and the shock of losing him scared Reiner straight.

That Bertholdt was the colossal titan. He caused the islanders so much pain and justified his actions by telling himself it was for the greater good.

Zeke Jaeger becomes instrumental as the plot progresses. He is Eren’s brother and feels his father wronged him before fleeing.

Zeke feels that the world would be a better place without the subjects of Ymir. So he tries to rid the world of his people, but Eren stops him.

Zeke is a terror on the battlefield as the beast titan. He is incredibly intelligent and adept in both titan combat.

Some of the characters have varying heights because of their titan forms. While these are their present heights, they physically change as the plot progresses and time flies.

We can see that the mentioned heights vary greatly. Historia is incredibly short, and Bertholdt is surprisingly tall.

So:Are you the same height as your favorite character? Let us know in the comment section below!