A Few Things About Encanto’s Many Characters – Are Taller People Really More Powerful? 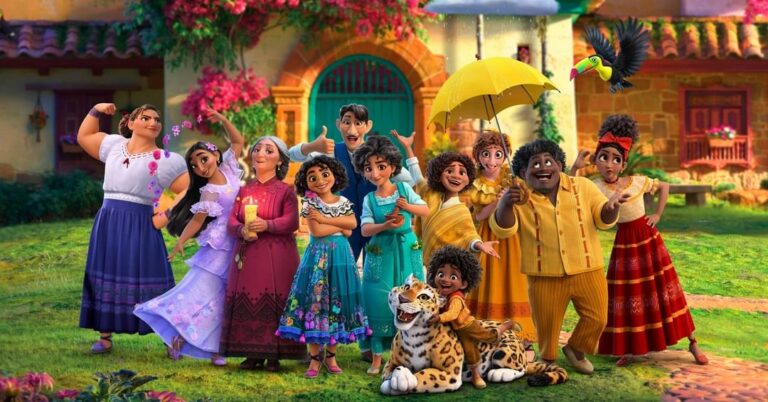 We can all agree that:

It’s natural to love or be fond of a film you relate to.

It could be that the storyline aligns with your life’s pivotal event; or a character goes through something you’ve experienced; or you share the same personalities as the main actors in the movie.

Whatever the relation is, it can convert one from being a typical movie-goer to a super-fan.

With that in mind, the characters in the film – Encanto – are unique in many ways. However, most of the things they go through are things many can relate to.

But, you can also relate to Encanto characters based on their other, more defined qualities like height, age, and birthday.

Do you want to learn more about your favorite characters?

Well, let’s take a closer look at each.

But a quick note first…

The birthdates for these characters are according to statements made in interviews by Jared Bush, Byron Howard, and Charise Castro Smith.

These three are the writers and directors of the film. So if anyone knows more about these characters, it’s them.

As the star of the show:

Mirabel is physically smaller and younger than many of the other characters in Encanto.

Her small stature could symbolize how people see her, especially since she doesn’t have a magical gift.

She is often mocked by other members of her family, and doesn’t take part in some of the more fantastical aspects of the Madrigals.

Mirabel ends up being the most powerful person in the family as the film progresses.

What about her birthday?

Her birthday – March 6 – is the same as Gabriel Garcia Marquez, a Colombian author who greatly influences this film.

Marquez wrote many stories about multi-generational families, including “One Hundred Years of Solitude” and “Love In the Time of Cholera.”

Isabela is Mirabel’s older sister and has the power to grow plants and flowers.

She is always seen as a perfect daughter, as she can spread her beauty everywhere she goes.

Is her birthday noteworthy?

Her birthday – August 7 – is the same day as the Battle of Boyaca. This fight was a battle in 1819 that led to the start of Colombia’s independence.

Isabela has a desire to be independent, thus, making this an appropriate birth date for her.

Luisa – Mirabel and Isabela’s sister – is massive because she has immense physical strength. Her vast size makes her loom well over others in the family.

Her large stature leads many people to think that she is the most powerful in the world. But while she is strong and intimidating, Luisa is also deeply insecure.

She’s a true woman, and her birthday says so too.

Luisa’s birthday – November 14 – is also the Day of the Woman in Colombia. This day celebrates women in the country and their contributions.

As one of Abuela’s triplets…

Julieta is the mother of Mirabel, Luisa, and Isabela. She is a cook who can heal people with her food.

What makes this war important?

The Thousand Days’ War was a civil war in Colombia, where Encanto takes place.

Here’s what I think. Like with any war, innocents are bound to get diplaced or, even worse, killed.

Unfortunately, the first-generation Madrigals experienced both scenarios; i.e they had to flee and Pedro lost his life in the process.

Agustin is Julieta’s husband and father of Mirabel, Luisa, and Isabela.

From what I could gather, his birthday is on June 19, which is also Father’s Day in Colombia.

This date is suitable for his birthday, as Agustin is a devoted and caring father who is always there for his daughters.

On the other side of the family tree:

Dolores is the oldest child of Felix and Pepa. She’s Mirabel’s first cousin and both are Alma’s granddoughters.

She has the power to hear even the faintest of sounds from far away.

Some might argue that her heritage is a big part of who she is, hence her birthday – August 31.

It’s a day when Colombia celebrates residents of African descent.

Camilo is the middle child of Felix and Pepa. He is fifteen years old, but his height will vary based on whose form he imitates.

He has the power to shift into various forms, making him capable of appearing as anyone.

His birthday on December 28 is also Childermas – the Central and South America’s version of April Fool’s Day. A day that entails people engaging in many harmless pranks or inocentadas.

This birthdate is appropriate for a trickster like Camilo. He never means wrong, as he does it all out of fun. Perhaps the rest of the family could learn from his casual attitude.

Don’t forget the youngest member of the Madrigal Family…

Antonio is the youngest in the family and is a child of Felix and Pepa. His power is the ability to talk to and listen to animals.

Pepa is the sibling of Bruno and Julieta and is the wife of Felix. She is also Dolores, Camilo, and Antonio’s mother.

Her gift is the ability to control the weather based on her emotions.

Felix is Pepa’s husband with a calm and relaxed personality.

Arguably, he is more laid-back than other members of the family, and his nice demeanor helps keep Pepa under control.

Felix’s birthday is on November 11. A day that marks the Independence of Cartagena – a city in Colombia with a sizable population of people of African descent.

Whether Casita is near Cartagena is unclear.

We should also talk about you-know-who…

The disowned sibling of Pepa and Julieta, Bruno is not a seven-foot-tall man, as some would believe.

But what does his size say about him?

Well, Bruno’s short frame gives the impression that he is not the daunting or intimidating person most people perceive him to be.

Bruno’s power is to see into the future, a quality that often makes people uncomfortable.

Talk about the Matriarch of the Madrigal Family…

Unfortunately, details on Alma’s birthdate are unclear, but as the mother of the Madrigal triplets, she is an important part of the family.

We don’t know much about her background except for how she met her husband, Pedro. And their blissful, yet brief, time together.

Throughout the film, she guards the candle that has given most of the Madrigal family members their powers.

Sadly, we don’t see much of Pedro.

The only time he appears in the film is when Alma explains to Mirabel what happened years ago and how Encanto came to be.

Pedro died to protect his wife Alma and their three newborn children.

And that’s just about everything you need to know.

Evidently, the details of these characters in Encanto are interesting because they symbolize many things about who they are in relation to Columbia’s rich history.

From their birthdates being on specifically appropriate days or their sizes being larger or smaller than people expect, these qualities about them are fascinating.

What do you think about these points? Do their ages and sizes make a difference?

I’d love to know what you think. So, feel free to leave a comment down below.

How old is Mirabel in Encanto?

Mirabel is 15 years old, making her the youngest sibling on her side of the family.

How old is Dolores in Encanto?

Dolores is 21, making her the oldest person in the family’s third generation.

How old is Bruno in Encanto?

How old is Pepa Madrigal in Encanto?